Deprecated: Non-static method SefAdvanceContent::parse() should not be called statically in /home/customer/www/cbfevents.org/public_html/components/com_sefadvance/parse.php on line 360

Deprecated: Non-static method SefAdvanceContent::_isUniqueArticle() should not be called statically in /home/customer/www/cbfevents.org/public_html/components/com_sefadvance/extensions/com_content.php on line 55

Deprecated: Non-static method SefAdvanceContent::parse() should not be called statically in /home/customer/www/cbfevents.org/public_html/components/com_sefadvance/parse.php on line 360

Deprecated: Non-static method SefAdvanceContent::_isUniqueArticle() should not be called statically in /home/customer/www/cbfevents.org/public_html/components/com_sefadvance/extensions/com_content.php on line 55

Deprecated: Non-static method SefAdvanceContent::build() should not be called statically in /home/customer/www/cbfevents.org/public_html/components/com_sefadvance/build.php on line 187 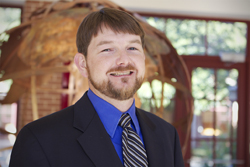 Steven Porter was named CBF’s new Global Missions Coordinator after an extensive search process at a press conference on April 30, 2014. He is a strategic and innovative former CBF field personnel and former director of Touching Miami with Love, one of the Cooperative Baptist Fellowship’s flagship urban ministries. Porter begins work at the Fellowship’s Decatur, Ga., office on September 1.

Porter holds ordination in the National Baptist Convention (USA) and currently teaches courses on the history and theology of Christian mission, including one titled Evangelism: A Contextual Approach, at one of CBF’s partner schools, George W. Truett Theological Seminary at Baylor University. His academic pursuits have provided connections to other CBF partner schools as well. He earned an M.Div. at Candler School of Theology and is pursuing a Th.D. from Duke University Divinity School, where he has been involved in the Baptist House of Studies. He has also taught courses in evangelism at William Jewel College, in Liberty, Mo., and served as a teaching assistant at Duke Divinity.

Porter was commissioned as a field personnel on CBF’s Urban Team in 1998 and served in Miami until 2005. In his work with Touching Miami with Love and through his various academic pursuits, Porter has connected with many of CBF’s state and regional organizations, including CBF of Florida, the Kentucky Baptist Fellowship, CBF of Missouri (now CBF Heartland), CBF of Texas and CBF of North Carolina. In North Carolina, Porter served on the Wealth and Poverty Task Force; and in Texas, on the national CBF Missions Council. He currently is the chair-elect of the CBF Missions Council.

While in Miami, Porter served as a chaplain in a federal prison and a street pastor for a homeless congregation. He was pastor of Downtown Mission, Central Baptist Church, in Miami from 1998 to 2005. In his leadership at Touching Miami with Love, Porter focused the organization on its core strengths — ministry to the homeless community and families at risk in the Overtown neighborhood. Part of the decision to narrow the ministry’s focus also included a concern to identify more closely with their neighbors – to be the presence of Christ in that community. Consequently, Touching Miami with Love relocated from downtown to a new ministry center in the heart of Overtown, which opened doors for expanded advocacy and community organizing.

Internationally, Porter has developed a passion for building relationships with Christians from the Global South, having served three stints as an international student, leading an international student ministry in Miami and participating in the work of the Baptist World Alliance and the International Association of Mission Studies. In 2010, he was the recipient of a Henry Luce Foundation Research Grant for work at Gadjah Mada University in Yogyakarta, Indonesia.